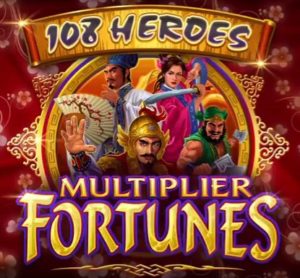 It’s that time of the month again, when the world’s leading developer of digital gambling software, Microgaming, prepares to release its newest creations. As always, Royal Vegas Casino is among the first to install the brand’s new mobile slots.

The new mobile slots game is scheduled to release in early September. You can check out Microgaming’s official promo video now for a taste of what’s in store. Or, if you don’t want to wait, try playing the original 5-reel version of 108 Heroes that’s already available at Royal Vegas, featuring the same main characters.

Once again, Microgaming leads players back in time to the old days of the Orient, where a band of ancient Chinese warriors prepare to defend their dynasty and restore honor to the kingdom. Like its 5-reel predecessor, the new mobile slots game revolves around four fearsome warriors, three male and one female. This time, however, it’s all packed into a classic 3-reel slot with 9 paylines.

The standard symbols in 108 Heroes Multiplier Fortunes are typical of this type of slot machines. They include red and blue 7s, along with single, double and triple bars, all ornately designed with an elegant, Oriental touch. 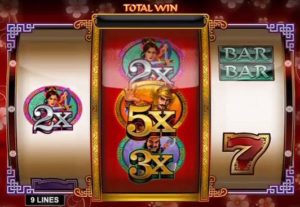 There may be fewer positions on the reels in this newest edition, but those warriors aren’t shy. There are four of them, and they bring with them a variety of multipliers, ranging from 2x to 5x. To make things even more interesting, they also happen to be all wild symbols, capable of triggering the game’s ‘epic respins‘ feature.

When two wilds appear in the same payline, their multipliers combine. For example, a 2x multiplier on the first reel, plus a 5x multiplier on the second, will trigger a 10x multiplier on that payline’s wins. And when two or more wild warriors stack in the center reel, it triggers a respin of the first and third reels. With just a little luck, this can develop into some fantastic payouts.

Being a 3-reel slot machine, there are no free spins or additional bonus rounds to be played. If such features are that important, you may wish to stick with the original 5 reel, 15 payline version of 108 Heroes. But for many players, the presence of such abundant multiplier wilds will easily make up for the lack of additional features.

I’ve always been a fan of classic 3 reel slots. Although I do enjoy the heightened thrill of a 5 reel video slot with a throng of features, it’s usually the classics that bring the higher payouts. Whether 108 Heroes Multiplier Fortunes will live up to that experience is yet to be seen. We won’t find that out until the new mobile slots game makes its debut at Royal Vegas Casino next week.