According to the Winner’s Wall at Royal Vegas Casino, the Break Da Bank Online Slot is on fire this summer. In just one day – Monday, July 17, 2017 – the game paid out more than EUR 75,000 to three very lucky members of the Fortune Lounge group of online casinos. Five other slots paid out big jackpots that day, too. Maybe Mondays aren’t so bad after all?

Note: All prizes from the Maltese operation are displayed in Euros.

The first player to scoop a big win on Break Da Bank cashed out for a whopping 34,250. That’s not chump change, being enough to buy a shiny new car, put a nice down payment on a house, or pay down some lofty financial debt.

The second player walked away with another tidy sum of 21,000. Astonishingly, a third player hit the exact same prize on the exact same day. He or she also struck the jackpot to the tune of 21,000.

That’s a grand total of EUR 76,250. Congratulations to all who shared in that wealth on what turned out to be a very lucky Monday for those Fortune Lounge casino members. 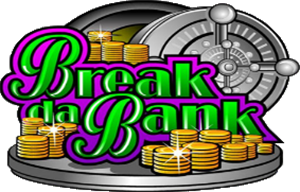 Break Da Bank is not your typical 3-reel slot machine, though. The Break Da Bank logo acts as a Wild, and the game’s highest paying symbol. Wilds aren’t all that uncommon in 3 reel slots these days, but there’s a much stranger feature on the pay table. The payout for a line of 3 wilds varies depending on what payline it lands on.

If a trio of Break Da Bank logos appear on the first payline, it’s worth a generous 1000x payout on the line bet. Across the second payline, it jumps to 1200x, and 1400x on the third. Line it up on payline four and you’ll earn 1600x the line bet. The highest jackpot of all is paid when Break Da Bank symbols fill the fifth payline, worth a hair-raising 2400x.

Those winning combinations aren’t too hard to line up, either. There’s only a few symbols on the reels, including the Wild, Dollar Sign ($), Single Bar, Double Bar and Triple Bar. The lowest payout of 5 coins is paid for lining up any combination of bar symbols, while the highest standard payout is 160 coins for a line of $$$.

Royal Vegas and its sister sites under the Fortune Lounge name have congratulated a lot of other winners this week, too. Surprisingly enough, five out of six all found their luck on the same Monday, July 17.

The Lucky Twins Slot, one of Microgaming’s more recent releases, was struck for 27,750. The High Society Slot hit twice that day, paying 31,540 to the first big winner, and another 17,960 to the second. The Cashapillar Slot then dished up a tasty prize of 20,394. On the Video Poker side, one very lucky player of Jacks or Better scooped 20,000.

And finally, just this morning, another fortuitous slots fan cracked the vault on Microgaming’s Bust The Bank Slot to the tune of 22,650.