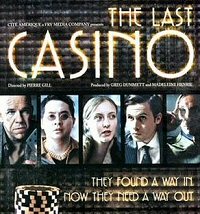 Did you ever fancy yourself a member of an expert blackjack team, employing mathematical genius to beat the casinos out of millions? Or maybe you just enjoy casino movies, or gambling in general? If any of this applies to you, chances are you’ve seen the Hollywood blockbuster film, ‘21‘. It was easily one of the best performances of Kevin Spacey‘s illustrious, multi-award-winning career.

But I’d be willing to bet you haven’t seen a movie called The Last Casino (La Mise Finale). It doesn’t feature an A-list cast. It wasn’t filmed in Las Vegas or Atlantic City. Heck, Director Pierre Gill only had a $5 million budget to work with, including cast, crew, set and equipment. Let me tell you, $5 million doesn’t go too far in today’s film industry. As such, it was produced as a television movie, not a box office release.

Despite all this, The Last Casino is easily one of the best, most moving and realistically portrayed stories since the turn of the millennium. And guess what? It was filmed right here in our very own Canada casinos.

The film stars Charles Martin Smith. You may not recognize the name, but the face is unforgettable. This 3x award-winning (13 times nominated) actor is one of Hollywood’s unsung heroes, appearing in dozens of television shows, TV movies and theatrical films since the early 1970s. In fact, he was nominated for Best Performance at the 2005 Gemini Awards for this very film. He didn’t win, but the movie earned a trio of awards.

Smith portrays mathematics professor Doug Barnes. He’s a degenerate gambler, but has the skills to win at blackjack. And he needs to win big so he can pay off a sizable debt to the film’s antagonist, Orr (Julian Richings). But just as he’s doing well counting cards at the casino, Wilson (Normand D’Amour), the security manager, takes notice. Suddenly, Barnes finds himself blacklisted from every casino in the area.

Upon realizing that three of the university’s students are savant-grade math whizzes with exceptional memorization skills, Barnes works to recruit them as a blackjack team. Convincing the group that there’s little risk for them, Barnes takes them under his wing and begins teaching them the art of card counting.

Each team member is given a bankroll to hit Canada’s biggest casinos, and as the plot progresses, they begin making money on a very large scale. What happens next… well, you’ll have to watch the movie to find out.

If the plot sounds familiar, it should. It’s largely taken from the 2003 New York Times Best Seller, Bringing Down the House, by Ben Mezrich. The very book the film 21 was based on in 2008.

I highly recommend seeing this movie, whether you’re a blackjack player or not. Unfortunately, it’s not the easiest flick to find. Being a made-for-TV film, it doesn’t just come on very often. But you can find it if you do a little digging.

I don’t recommend Amazon. Although it goes for under US-$5 in America, Amazon.ca is charging at least CA-$29.99 for it.

It’s not on Netflix, Prime Video, or any other paid streaming service I know of. There are of course pirated movie streaming sites, but I certainly don’t recommend them. You can find it on eBay, where it’s going for about $20, or try looking for this great Canada casino movie at yard sales come spring.