Cash of Kingdoms Slot to hit Microgaming online casinos in 2018.

Earlier this month, Microgaming stole the show at the ICE Totally Gaming summit in London. The famous Microgaming Bar took center stage, where each day, the company transformed the popular meeting point into a vast spectacle of promotional material to unveil upcoming products. On the final day, the area was devoted to their most anticipated game of the year, the Cash of Kingdoms Online Slot.

Attendees of the show were charmed by the transformation on day 3. The Microgaming Bar became a medieval kingdom, lined with archery targets, full suits of armor, gunpowder kegs for tables and other decoratively themed items. What really stole the show was the foot-archer, a contortionist dressed to emulate the game’s feisty archer character, who wowed the crowed with her amazing stunts.

As they do every year, Microgaming went all out to promote the upcoming Cash of Kingdoms online slot. Based on demos exhibited at the debut, it’s going to be a real beauty of a game. It’s set to hit Microgaming online casinos later this year. Unfortunately, an exact date is not yet available.

According to one source, it could come as early as February 23, but that wouldn’t align with Microgaming’s release pattern. New titles are generally launched in the first or second week of each month. The company already launched Lucky Little Gods earlier this month, and the only game on the menu for release next month is Playboy Gold, due to arrive March 7. 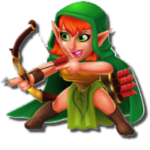 This online slot is stacking up to be a real crowd pleaser. It’s a 5×3 reel game with 15 paylines. The graphic rendering is magnificent, and the character development goes well beyond the norm.

Cash of Kingdoms feature five main characters as heroic allies in the legendary quest for fame and fortune. These characters make up the high paying symbols, and include a courageous knight, an enchanting wizard, a wily rogue, a feisty elven archer, and brawny barbarian. It has all the making of a sci-fi RPG game, packed into a full-featured slot machine.

The lower paying symbols aren’t the usual playing card values. My applause to Microgaming for that! They include thematic icons, like gunpowder barrels, magical spell books and the archer’s bow and arrows.

Microgaming made sure to maintain some secrecy with the upcoming release, keeping the anticipation level high for the Cash of Kingdoms online slot. All we know right now is that the wooden shield is the wild and that it contains a brand new feature known as Invading Wilds. When it triggers, a barrage of flaming arrows will fire upon the reels, performing some potentially lucrative task.

Coming to Microgaming Online Casinos in 2018 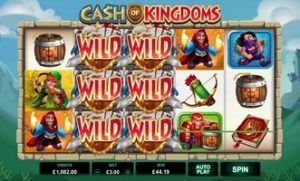 The Cash of Kingdoms Slot is fully optimized for desktop and mobile, with special attention paid to mobile compatibility. The game isn’t quite ready for launch yet, but Microgaming’s Games Publisher, David Reynolds, says it’s going to be a big moment for the brand.

“Launching later this year, Cash of Kingdoms is built on a strong game engine that will give players an action-packed escapade with fantastic payouts,” says Reynolds.

“Combining an exciting feature set with a popular theme that appeals to many mobile gamers, we anticipate Cash of Kingdoms to be a long-term player favourite,” he continues. “It’s the perfect adventure to add to our diverse games roadmap for 2018.”