Home  »  Slots and Games   »   Are Celebrity Slots a Good Choice for Players?

Pros and cons of playing celebrity slot machines at casinos.

Las Vegas and online casinos alike are teeming with thousands upon thousands of slot machines. They come in every theme you could possibly imagine. Some of today’s most popular games are celebrity slots, imbued with the faces of today’s most famous film, television and musical artists.

Players are often attracted to these types of games out of sheer familiarity. Cat lovers enjoy cat-themed slots. Sci-Fi movie buffs might be drawn to games that feature titles like Jurassic Park and Lord of the Rings. It’s simple logistics. 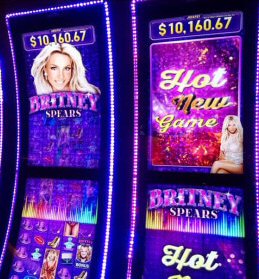 In the same token, a fan of Britney Spears who comes across the Britney Spears Slot, developed by Aristocrat Leisure in 2014, will most likely play it. Even if they didn’t intend to play slot machines, they will probably drop at least $5 on it.

Statistics have shown that games featuring popular celebrities attract massive crowds. This brings about an interesting question, though. Is it a good idea to play celebrity slots, or are they a bad bet?

The answer lies mostly in what you intend to gain from the experience. We’ll take a look as some pros and cons, then you can decide for yourself.

I’m starting with the cons section, because I’m a firm believer in getting the bad news out of the way first. The most glaring problem with celebrity slot machines is usually the payback percentage, or return to player (RPT).

When a slot manufacturer and their client – the casino – is expecting an elevated number of players to use a machine, they feel like they can set the RTP lower without damaging its popularity. A standard 3-reel classic slot may carry an RTP of 92%, while a game featuring a famous celebrity might have an RTP of only 88%.

This is only an example, not a factual figure. And not every manufacturer/casino is going to increase its house edge in such a way. But for the most part, this is how they operate. The more popular a game’s theme is, the lower the RTP can be set without diminishing its activity on the gaming floor.

There are two noteworthy advantages to playing these games. First and foremost, they are extremely entertaining. If you aren’t deriving entertainment from slots play, you need to rethink why you’re gambling in the first place.

No player should ever walk into a casino expecting to win. The odds are always against you, and the longer you play, the worse your odds of winning become. You must look at gambling as just another form of paid entertainment. The more you enjoy the experience, the easier it will be to incur any potential losses.

Secondly, there’s always the chance that the namesake celebrity will suddenly appear in the casino. They may even run up and cheer you on, giving you extra cash to play with! Think I’m crazy? It’s happened before.

International Game Technology (IGT) is responsible for one of the most popular celebrity slot machines ever released, the Ellen Degeneres Show Slot. To commemorate the new game, Ellen actually showed up at MGM Casino one day (with her TV show crew to catch it all on video), surprising players of the game. They were shocked, of course, nearly falling from their chairs with excitement as Ellen circled the slots cabinets, passing out money so the players could keep spinning the reels.

I don’t know about you, but if I were playing my favorite celebrity’s slot machine, and that person walked up behind me, I’d probably need to change my underwear afterwards. If that’s not entertainment value, I don’t know what is!