Are the coldest slots really the hottest slots to play online? 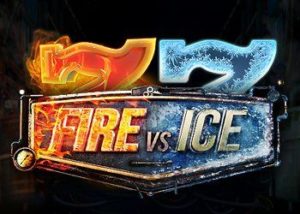 Everyone has their own theory on what constitutes a primed casino game or effective gambling strategy. A lot of people rely on what they call cold or hot casino games. But they don’t always agree on what makes a game cold or hot.

If you think about it, the term hot can easily be construed in two very opposite directions. Some consider a hot game to be one that is paying out consistently at the moment. Others swear that a game is only hot if it hasn’t paid out any remarkable prizes in recent history. This raises the question…

Are the Coldest Slots Really the Hottest Slots?

Royal Vegas and its parent company, Fortune Lounge Group, understand that players have discriminating tastes and differentiating opinions on which games are primed for a win. A quick visit to the Winners Page on the Fortune Lounge website will reveal everything you need to know.

Unfortunately, they haven’t been quite as forthcoming with hot/cold slots info lately. A few years back, when Royal Vegas kept up with its social media networking, the top 5 cold and hot casino games were listed weekly on its Facebook page. Now, you’ll only find the most thermostatically extreme games listed at Fortune Lounge. 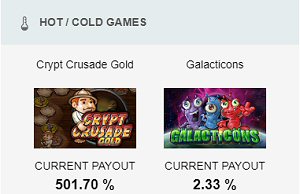 FL provides visitors with its #1 hottest and coldest gaming titles at any given time. For example, right now, players are winning big on one of Microgaming’s lesser known titles, called Crypt Crusade Gold. It’s not a slot machine at all, but an arcade-style game based on the once-popular board game. And right now, it’s paying out an incredible 501.7% RTP!

On the opposite end of the spectrum, the coldest (or is it the hottest?) game at Fortune Lounge casinos is Galacticons. It’s a 5 reel video slot with colorfully squishy alien creatures and cosmic symbols, capable of astronomical payouts. But lately, it’s been a complete dud. The game’s payback percentage is an abysmally low 2.33%. Ouch!

Are They Both Hot Casino Games?

On the one hand, I easy to say yes. Hot streaks certainly do exist, and if Crypt Crusader is performing so well right now, there’s no valid reason to say it’s going to stop. But at the same time, that argument could be applied to Galacticons – why should its cold streak suddenly get hotter?

They say all good things must come to an end. The hot streak will fizzle out, and the cold streak will turn around. Unfortunately, due to the unpredictably algorithmic way in which these games are built, there is absolutely no way to know when that will happen. Microgaming can’t eve predict that. The only thing we do know is that it will happen, sooner or later.

Theoretically, every slot machine will pay out its intended payback percentage. Realistically, it could be many years before it reaches that specific number. This is the reason why progressive slots are able to go years without a strike, just as easily as they can strike two or more times in a very short period of time.

It is this same unpredictable nature that makes the coldest and hottest slots so exciting to play. Their potential to deliver a big win is no different than any other game, yet player’s get an added element of excitement, certain that the percentages may be in their favor.

Update: It’s Amazing What Can Happen in Two Hours

This article took me a couple hours to complete, due to typical home-life delays. When I started writing, Crypt Crusaders was “hot” at 385.71% RTP. When I came back to take a screenshot of it, it had risen to 501.7%! Also at that time, the “coldest” game was Cracker Jack, a classic 3-reel slot with a current 6.65% RTP. When I revisited the FL Winners page, that had been replaced by Galacticons at 2.33%. Needless to say, I had to do some revisions to this article. Ha!