The start of each new month is always an exciting time for members of Royal Vegas and all other Microgaming powered online casinos. This is the time when the world’s leading interactive slots creator releases its new additions. Today, we’ll take a look at a new fantasy slots game called Gnome Wood, developed exclusively for Microgaming by Rabcat. 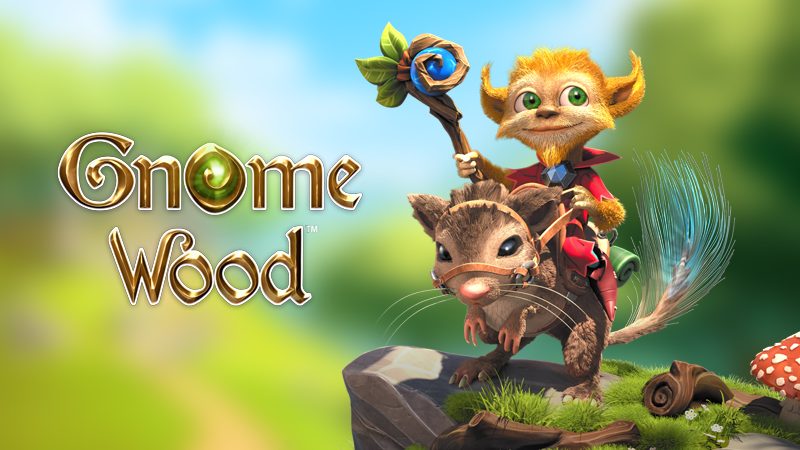 The Gnome Wood Slot appeared yesterday on Royal Vegas, and it’s got a beautifully rendered, mythical woodland theme that’s sure to attract a lot of players. The sci-fi motif is expounded by a brash young mouse-riding gnome, and the powerful forces of the four elements he controls with his magic.

This new fantasy slots game features a 5×3 reel-set with 25 paylines. With max lines active, the bet range scales from $0.25 to $25 per spin. While navigating the enchanted woodlands, players can unleash a top base-game prize of 1,000 coins.

The symbols on the reels all follow the magical forest theme. High paying symbols include a pink potion crystal, magic book, woodland staff, brewing cauldron, mouse and golden gnome emblem. On the lower end are runic representations of the four elements, earth, air, water and fire.

Two wild symbols also appear in the game; one stone with a blue rune, and one with a purple rune. The blue wild triggers two features, Wandering Wild and Bonus Respins. They combine to give players free respins whenever one appears on the screen. The wild will wander left one space across the reels, followed by a respin. This continues until the wild reaches the first reel, so a blue wild on the fifth reel will trigger four free respins in all. 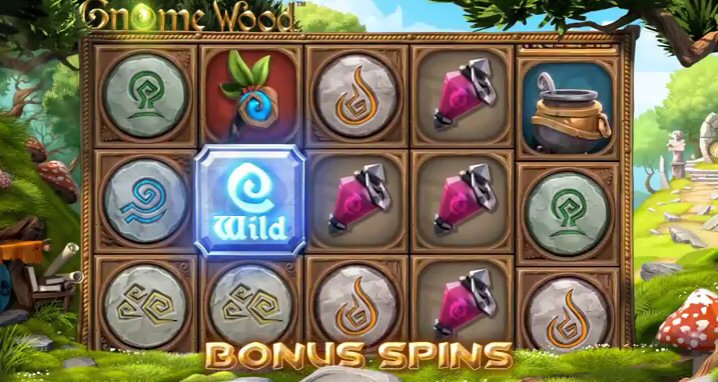 The purple rune wild works exactly the same, activating the Wandering Wilds and Bonus Respins, with an added bonus called Multiplier Wilds. These wilds comes with a 2x multiplier, so all winnings that involve this wild during the wandering respins are paid out at double the value.

Last but not least, the circular golden gnome emblem is the scatter. When a trio of golden gnomes appear anywhere on the reels, it will deliver 10 free spins to the player. The Wandering Wilds, Bonus Respins and Multiplier Wilds are still active during free spins, but no other extra features occur.

Gnome Wood also comes equipped with the standard Gamble feature, in which players can opt for a 50/50 chance at doubling the winnings from their previous spin, or losing it all. Gamble following any winning spin, except during free spins.

I’ve only had one session on this game so far, and I have to say it’s the impressive graphics and theme that I enjoy most. I haven’t found it to be all that rewarding in terms of profits, but entertainment wise, I really like it. Then again, I’m partial to well-made fantasy slots games.

The blue multiplier wilds don’t come often, and the one time it did, it only landed on the second reel during free spins. I also managed to land a blue wild on reel 5 once, also during free spins. It would certainly seem the wilds are more likely to hit during free games. In the end, I lost $7.20 on this game – not bad for a 45 minute session.