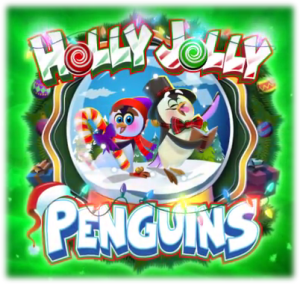 Have a holly jolly… penguin? Sure, why not! Penguins are adorable, and they love playing in the snow. They’re also going to love dishing up heart-warming wins during the holiday season, thanks to Microgaming. The world’s leading developer of online and mobile gambling games is set to release a new Christmas slots game in December, cleverly titled Holly Jolly Penguins.

Royal Vegas Casino was so pleased to announce the upcoming addition of a new mobile Christmas slot, they not only blogged about it, they published their own promotional video on YouTube. That’s normally left up to Microgaming. But Microgaming didn’t even get a chance to publish its teaser video yet. Way to go Royal Vegas for beating them to the punch!

The preview for this game is delightfully charming. So many cute little penguins in their cute little penguin poses. And of course it’s got an endearingly festive musical score to match. We won’t have a complete perspective on this game until it actually hits Royal Vegas about two weeks from now. But here’s what we do know… 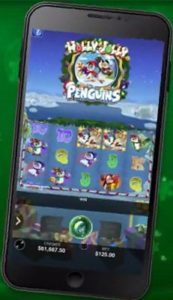 The Holly Jolly Penguins Slot has 5 reels and 45 paylines. All of the special and high paying symbols are penguins of some type. Most of them are encased in snow globes, but not all. Some are caroling, or dancing. Some have candy canes, sleds or are tangled up in the lights of a Christmas tree. On the lower end of the spectrum are snow-capped playing card values of 10, J, Q, K and A.

You’ll want to keep an eye out for the penguin in the snow globe holding a big candy cane. He’s the wild symbol. Along with the usual job of substituting for standard symbols, he actually pays on every line that creates a winning combination (not jut the highest win). They call it the ‘Mixed Wild Pay‘ feature. He also appears a lot more often during free spins.

The penguin gleefully sledding down the mountain slope is another good one. This guy is the scatter, and he can award up to 80 free spins! To trigger them, you must land at least one penguin on each reel 1, 2 and 3, worth 5 free spins. Landing another on the fourth reel increases it to 10 free spins, while another on the fifth reel jumps it to 15.

So how do you get 80? Scatters can appear stacked two-high on reels 2 and 3, resulting in up to 7 scatters on the screen. If all seven appear, you get the maximum 80 free spins. Additional free spins can be added to the total if more scatters appear during the free games feature. There’s no limit to the number of extra free spins you can get.

The new Christmas slots game isn’t the only one coming to Royal Vegas Mobile next month. Microgaming is also set to release it’s equally adorable (but not holiday themed) Wacky Panda Slot, alongside the latest addition to its movie/TV themed online slots series, Highlander.