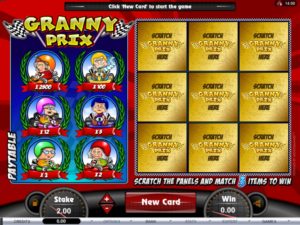 If you’re of legal gambling age and live in just about any first-world country, chances are you’ve scratched off at least one lottery ticket in your day. Instant win scratchies are one of the most popular forms of lottery tickets. Mostly because players don’t have to wait for a drawing to find out if they’ve won.

Like all other internet casino games, online scratch cards provide players with a way to participate in these fun games, for real money, directly from their desktop computer, smartphone or tablet.

How to Play Online Scratch Cards

On a mobile device, the experience is quite realistic. Players purchase their tickets with real money, then use their finger to swipe back and forth across the screen. On a desktop they use their mouse pad.

This virtual scratching reveals the symbols and potential prizes on the card, just as rubbing a coin, key or other thin, hard material over a physical scratch card would. Alternatively, players can expedite the process by clicking or tapping the ‘Reveal All’ button.

Once the card is fully revealed, players can determine whether they’ve won a prize or not. If so, the amount won is displayed at the top of the card. Since player’s can adjust their bet size—$0.50 up to $10.00—prizes are all paid in multiples of the bet, and are instantly awarded into the player’s casino balance.

Different cards have different rules of winning. They come in all varieties, from match-3, to tic-tac-toe, to single symbols that denote a win. In many cases, there’s a bonus box that can deliver an instant prize, or multiply any prizes found elsewhere on the cards.

Some rules are much more complex, since online scratch cards offer a much more diverse range of gameplay than physical cards. Some of the more basic types are defined below.

Match 3 Scratch Cards: These are the most common. The player hopes to reveal three alike symbols, or three alike multiplier amounts, in order to win a prize. The symbols/amounts will identify the size of the prize.

Tic-Tac-Toe Scratch Cards: Another common variety, these cards require the player to line up three alike symbols in any straght-line direction on a 3×3 grid. Doing so awards the prizes displayed on the card.

Single Symbol Scratch Cards: In these games, the player scratches off a series of symbols. The rules will denote which symbol(s) is worthy of a prize. If that symbol appears anywhere on the card, the corresponding prize is awarded.

Powered by the world’s leading interactive gambling software developer, Microgaming, members of Royal Vegas Casino have access to one of the largest varieties of online scratch cards, available for both dekstiop and mobile users. They include: