Powered by Microgaming and Evolution, Royal Vegas offers both American, European and French roulette in live and online formats for desktop and mobile. 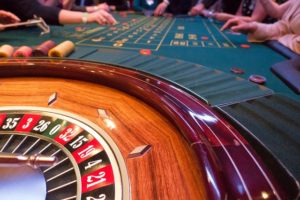 Casino games come in all shapes and sizes. The same can be said of players. It’s not always the theoretical return to player (RTP) or strategic quality of a game that draws us. Some of us are in it for sheer entertainment. It’s what attracts so many players to games like slots machines and roulette.

Both of these game types can be very exciting. Slot machines offer a vast array of features to enthrall and reward players. Roulette is kind of like playing the lottery. Watching that ball bounce around as the wheel slows can be quite exhilarating!

Between the two, I’d actually recommend roulette for two reasons. First of all – for you strategically minded players – you’ll get a better RTP from roulette. That is, if you pick the right version (more on that below!). Secondly, the games are paced out. It takes longer to spin a roulette wheel than a slots reel, meaning your bankroll won’t dwindle so fast during those inevitable cold streaks.

Royal Vegas Casino offers their players a complete collection of roulette variants. They come in both live and online formats. The online version are created by industry-leading developer Microgaming.

There are two ways to play roulette games at Royal Vegas (without requiring a download). You can play on your desktop computer, or on a mobile device. The desktop game variety is larger, while the mobile content is more limited. Thus your choice will effect which live and online roulette games you have access to.

All roulette games are played in one of three basic, regionally-coded formats. They include American, European and French Roulette. European is the most common variety of the all. Any game that does not specify its region (Multi Wheel Roulette, Premier Roulette, etc.) will be available with European rules.

Is there a difference between the games? Yes! The very first rule of thumb is to never play American roulette. It’s the only version with a double zero (00), which effectively doubles the house edge compared to European games. The next rule is to play French roulette whenever possible.

French roulette is the exact same game as European roulette, with one slight rule variation. It’s called La Partage. (From the French word “partager”, meaning “to share”). By this rule, all even-money bets (black or red, high or low, odd or even) are paid back at 50% if the wheel lands on zero (0).

Unfortunately, French roulette at Royal Vegas is only available for desktop players (not mobile), in standard online format only (no live tables). I have a feeling this will change in the near future, though.

Just last week, Evolution Gaming released a Live American Roulette variant. It hasn’t made it onto the Royal Vegas platform yet, but that’s okay. You don’t want to play that anyway. My hope is that Live French Roulette will be next on the production menu.

All live casino games at Royal Vegas are available for mobile, so if that’s the case, a mobile French roulette game may be just around the corner! Keep your fingers crossed.