Statistical analysis of men who gamble; how, when and why. 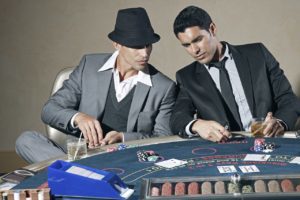 Earlier this week, we talked about the most prevalent tendencies of women of gamble. This time, the roles are reversed. We’ll look at statistic data that shows how, when and why male gamblers are the biggest risk takers.

Year after year, study after study, we find that men are far more likely to gamble then women. According to one study, 82% of online gamblers are male, while just 18% are women. They spend more, they bet on a wider variety of gambling options, and they are even more likely to develop a problem (although at a slower rate) than women.

This doesn’t mean that men are better or worse at gambling. Male or female, the luck of the draw or spin of the reels has more to do with percentile profit and loss. Even addiction is determined more by personality than anything else. But male traits do lean more towards an exhibition of at-risk behavior.

Common Traits Among Men Who Gamble

There is a lot of research data that points to a high rate of common traits in male gamblers. That doesn’t mean every guy who bets will fit the bill. However, if you’re among the male gambling population, you likely fit into one or more of these classifications.

Research has shown that the majority of men who enjoy wagering get their start early on. Most are around college-age, in their early to mid 20s, when they begin gambling. Women, on the other hand, don’t tend to start until they hit their early 30s. This aligns perfectly with the most prominent reasons why men gamble.

Most men start gambling for the social enjoyment of it. A weekend poker game, a communal experience around the blackjack, roulette or craps table… Gambling provides a social stimulus, as well as a form of entertainment for the guys. Women rarely gamble for social gain, but rather as a way to relive stress or boredom.

While their female counterparts are seeking sheer entertainment, most men view gambling as a potential source of income. As such, they tend to wager more than woman, but in shorter spurts (mostly because they either win or lose faster).

Men don’t often do things just to do them, but as a means of accomplishing a goal. They are much more competitive in this way, which leads us to their preferred forms of gambling, which clearly reflect this sentiment, as well as the desire for social interaction.

Because men gamble to win, they prefer games where strategy can be invoked. Betting on sports is certainly one of the more strategic ways to gamble, if you put enough effort into it.

Some guys will bet just to make the communal experience of watching the big game with their friends more exciting. But most will gather information, based on experience, sports news or handicapping websites, to make the best statistical picks.

In the casino, men tend to flock towards table games, where proper strategies can provide a higher win rate. Blackjack and poker are frequented by men more than any other casino games. Due to their competitive, bread-winning mentality, guys don’t mind spending more mental energy in an effort to win at strategy-based card games.

You’ve probably noticed that the vast majority of professional poker payers are men. The gender gap is reflected in every live tournament, and even in the Poker Hall of Fame. That organization honored 54 inductees between 1979 and 2017. 51 of them were men, and just 3 women. It’s worth noting that all three of those women were inducted in the last ten years.