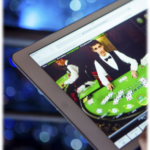 Evolution Gaming made quite the splash at ICE Totally Gaming in London last month. As promised, following the phenomenal success of its Dream Catcher Live release last year, several new live casino offerings were on the menu.

The title Salon Privé is a French term that translates to “Private Lounge”. As you may guess, access to these tables doesn’t come cheap. Evolution’s original “Private” tables come with a $10 minimum bet range. These new Salon Privé tables require players to spend no less than $1,500 per bet on the blackjack tables, and $2,000 per chip for roulette.

Evolution Gaming’s Chief Product Office, Todd Haushalter, is extremely proud of his company’s team for pioneering such an innovative product; bringing a touch of the real Las Vegas atmosphere to the digital realm.

“This has never been done before because it is so difficult to achieve operationally. We are offering players unprecedented levels of control over the game at totally private, single-player Roulette and Blackjack tables,” says Haushalter.

“From choosing their favourite dealer, to changing the cards to being in charge of the game speed, the players can control all of this and more,” he continues. “Our mission with the Salon Privé is to provide the sort of ‘white glove’ service that is offered in the private gaming salons of Las Vegas.”

Evolution also launched a revolutionary new live roulette game they call Lighting Roulette. For the first time, a live casino game combines the genuine professionalism of a real live game, with the benefits of an RNG application.

On the surface, these live roulette tables are like any other. Real players place their bets, real croupiers spin the wheel, and real payouts are delivered to winners. However, in this version, an electronic random number generator (RNG) will also identify anywhere from 1 to 5 “lucky numbers” on each and every spin. Any player who bets straight up on any winning lucky number will receive a payout raging from 50:1 to 500:1.

“This is the most complex product we have ever done,” admits Haushalter. “But all that complexity is hidden from the players, who only see that each round, between one and five numbers are struck by lightning and given magnified pay outs of 50x – 500x.

“To do this we combined digital random number generators with the Live Roulette wheel, which has never been done before,” boasts the Evolution exec.

Dragon Tiger is not exactly baccarat, but quite similar in appeal. Instead of Player and Banker, the game has a Dragon and Tiger to bet on. And, instead of two cards, each hand receives just one card, so it’s more of a High/Low game. Kings are high, Aces are low, and the highest hand (or Tie) wins.

Evolution Gaming began by rolling these new live casino games out at LeoVegas immediately after ICE. They’ve since spread to 888 Casino, Unibet, and a few others. Availability will expand to more Evolution online casinos in the coming months.