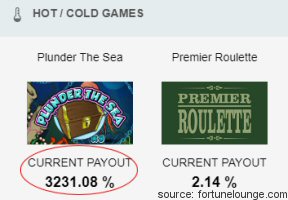 While pursuing the latest promotions of the Fortune Lounge Group, operator of our favorite Royal Vegas Online Casino, I found something amazing. I discovered that one of their less popular scratch card games is paying huge dividends.

The aquatic-themed Plunder The Sea Scratch Ticket – and old, often overlooked title from Microgaming – is paying out a phenomenal rate. At time of writing, its actual return to player (RTP) is a staggering 3231.08%!

Obviously, the game is not programmed to pay out at such a lucrative rate. No casino game ever is. Plunder The Sea has a theoretical RTP of 96.38%, which makes the actual RTP all the more astonishing.

The theoretical RTP is the amount at which an online casino game’s developer sets the payout rate. Since the Plunder the Sea Scratch Card has an RTP of 96.38%, we know that – over a very long period of time – it will pay out exactly $96.38 for every $100 players wager on it.

For any online casino game to exceed a 4-digit (excluding decimals) actual RTP is incredibly rare. This online scratchie is clearly paying out large prizes in a rapid succession.

Plunder the Sea is an online, instant win scratch card with two games in one. It has an aquatic theme, featuring a variable treasure trove of deep sea creatures, like whales, seals, turtles, angler fish, star fish, octopus and more.

In the first game, players pop the 6 bubbles reveal the sea creatures. The object is to match three alike symbols, with each symbol having a preset value. Star fish are the lowest paying, worth 10 credits for three. Whales pay the highest winnings of 100,00 credits for three matches.

The second game features a wooden treasure chest. Players will scratch off this section for a chance to win a prize of up to 1,000 credits.

Best Game to Play, or Avoid?

There’s always been wide debate in this department. Is a game that’s paying out at such a high frequency / value the best game to play? Or is it best to avoid? The hot-versus-cold game theory can be seen either way.

On the one hand, with a 3200+ RTP, the game is obviously paying out very often. Players might do well to get in on that action while it’s hot. On the other hand, in order to eventually meet its theoretical RTP, some would argue a game that’s paying such high dividends is bound to stop paying, and for a very long time.

The real question is, which will occur in the immediate future? Will it keep paying, or tighten up for months to come?

Thanks to the random number generator (RNG) that powers all online casino games, there’s absolutely no way to tell. They are 100% unpredictable. Not even the game’s manufacturer, Microgaming, or the heads of Royal Vegas online casino, know what’s going to happen next.