Exactly one week from now, the world will celebrate the spookiest holiday of the year. Halloween is almost upon us, and that can only mean one thing for all you casino-loving gals and ghouls. It’s time to find the scariest slot machines on the web!

We’re not just talking about Halloween slot machines. There are dozens of those. Most of them are anything but scary. ‘Halloweenies‘ is a perfect example. If you’re looking for sweet, cutesy, cartoon-style fun, be my guest. But the following list is designed to please those of you who really appreciate the ‘tricks‘ more than the ‘treats‘.

Without further ado, let’s take a look at the scariest slot machines Royal Vegas Casino has to offer in 2017.

With Microgaming at the helm, Royal Vegas Casino has a lot of Halloween themed titles to choose from. But if you really want the scariest, most frightening, bone chilling reel spinners of them all, you’ll definitely want to take a flutter on these next five games.

Just in time for Halloween 2017, Microgmaing unleashed the absolute scariest slot machine of all time earlier this month. The Halloween Online Slot game is based on the original 1978, cult-classic horror film, Halloween, by John Carpenter. Through a contract with the film studio, Microgaming secured the rights to integrate the spine-tingling soundtrack, characters and cut-scenes from the movie. Will you help Dr Loomis save Laurie and her friends from the merciless serial killer, Michael Meyers? 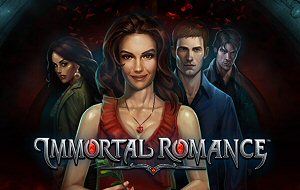 This title has made the list of ‘best Halloween slots‘ every single year since its released in December 2011. Its popularity is largely derived from the Twilight Saga films, which it mimics in a multitude of ways. The game features four main characters. There are two wickedly handsome male vampires, one beautiful girl for them to fight over, and another vicious vixen who aims to tear them apart (literally!) 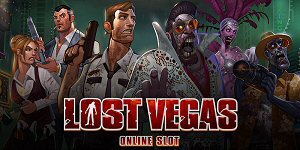 It’s zombie time, al la Walking Dead and World War Z! Lost Vegas is set on the dark streets of post-apocolyptic Las Vegas, and this time, players get to choose sides. You can team up with an unlikely band of human survivors to fight the undead, or join the zombies in a Vegas Strip blood-bath. Better yet, why not try both? You can switch sides anytime during the base game. 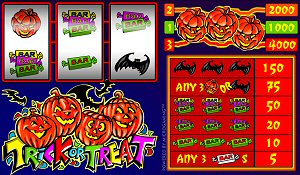 Indulge your sweet-tooth in this perfectly themed Halloween slot machine. It’s equipped with all the classic symbols of the holiday, packed into a 3×3 classic reel set. Trick Or Treat’s best paying icons are creepily carved jack-lanterns and vampire bats, with a few tasty BAR candies rounding out the lower end of the pay table. 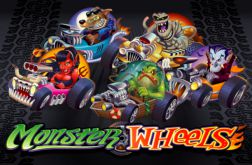 Monster Wheels is another new release by Microgaming. I wouldn’t necessarily call it the scariest Halloween slots of 2017, but it’s got the making of a holiday favorite. It’s a spook-tacular racing themed game, featuring a variety of frightening costume creatures. They include a blood-thirsty vampire, swamp creature, mummy, werewolf and she-devil, all driving appropriately decorated racing karts. Imagine Mario Kart meets Monster Squad.